While the Denver metro area boasts more than 80 breweries and counting, Stapleton and Park Hill residents have been living in a veritable beer desert. Much to the relief of beer enthusiasts, five breweries  have opened nearby. Here is a rundown. Bottoms up!

By David Vogel, Stapleton resident and craft beer fanatic since he waited tables at a brew pub during college in the early ‘90s. Justin Baccary opened Station 26 in December 2013 in the station house formerly occupied by the fire crew now located in Stapleton. Head brewer Wayne Waananen brings more than 30 years of brewing experience and strives to offer a beer to suit any taste, hence the motto, “For you for all.” Interior seating and an expansive patio area separated by large open garage doors (weather permitting) make Station 26 a place to sit and talk. The recent addition of a wall-mounted TV also allows patrons to watch sports. In addition to its regular lineup of beers, every Thursday the brewery offers firkin releases, typically in 10.8-gallon batches. The firkins typically feature fruit, tea, spices, dry hopping, or other modifications. Station 26 is open seven days a week. Food trucks park out front daily, and the second Sunday of each month there is a Bluegrass Brunch with live music. Park Hill residents and husband-and-wife team Ryan and Christa Kilpatrick opened Fiction on September 27. With six years of home brewing experience, Ryan is the head brewer and Christa runs the taproom. Fiction derives its name from a combination of Christa’s love for books and Ryan’s love of beer. The brewery has something for everyone, along with rotating seasonal and experimental offerings. In addition to its spacious inside seating area and patio, Fiction features what has to be one of the most unique bar designs, consisting of a facade of actual hardback books stacked like bricks under the bar top. The taproom has two TVs that, except for Broncos games, remain off for a conversational environment. Fiction bills itself as a family-friendly neighborhood brewery. They plan to have a book exchange and a variety of food trucks and carts. The brewery is located on the ground floor of the Phoenix on the Fax apartment building and is open Wednesday to Sunday. After home brewing for four years, Nate Flatland opened Mu Brewery in early June. The brewery, named after the Greek symbol used for micro measurements, is located immediately south of the Eastbridge neighborhood in Aurora’s up-and-coming arts district. As part of the effort to revitalize downtown Aurora, Mu puts a creative spin on everything it does, from its beer to its support for local artists. In addition to its flagship lineup of five beers, featuring light to dark to hoppy, Mu offers a variety of creative specialty beers that change regularly. At 5pm every Friday, they release a small-batch. The brewery donates 1 percent of all its sales to improve the arts district. The taproom is open seven days a week. Trivia is every Tuesday and players can win prizes such as beer growlers and tickets for Fox Theatre shows or other events. In addition to a variety of nearby restaurants, food is available from the food trucks gradually being added to the mix. 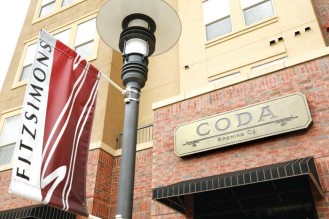 After beginning his career in biochemistry and molecular biology, Luke Smith started home brewing. He then worked as a professional brewer at Yak and Yeti and in April, opened Coda Brewing Co. on the Anschutz campus. Like the symbol at the end of a music passage, Coda signifies the end of the brewing process or enjoying a beer at the end of a day’s work. A self-proclaimed “hop head,” as head brewer Luke specializes in hoppy beers and fruit beers. Unlike many breweries that rely on a single house strain of yeast, Luke uses his chemistry experience to develop unique yeast strains for each beer. Although Coda offers a lineup of typical beers, it also features a wide range of “experimental elixirs,” one-offs, and seasonal brews. Depending on demand, smaller batch beers can end up as regulars. Coda is open seven days a week and offers a full menu from its sister restaurant, Cedar Creek Pub. The taproom features live music almost every Friday night and open mic night on Tuesdays. After home brewing for several years, Dan and Betty Wang founded Caution: Brewing Co. on 39th Ave. They mostly supplied Lao Wang Noodle House, a local restaurant owned by Dan’s parents, but after a neighboring business closed they added a taproom in May 2012. They opened a second west location in Lakewood in December 2013. Caution focuses on “uniquely balanced” beers by adding a new spin to historical beer styles. The east taproom hosts a big anniversary party each May and an annual Halloween fest with a DJ, costume contest and special fall beer releases. This year’s fest will be on Thursday, Oct. 30. The taproom has regular hours Thursdays through Sundays each week, but will also be open on Wednesday, Oct. 1 to celebrate the Great American Beer Festival, where Caution will have a booth. Caution brews are also frequently served at the Stapleton Tap House in Northfield. They plan to start canning several beers in the fall or winter.