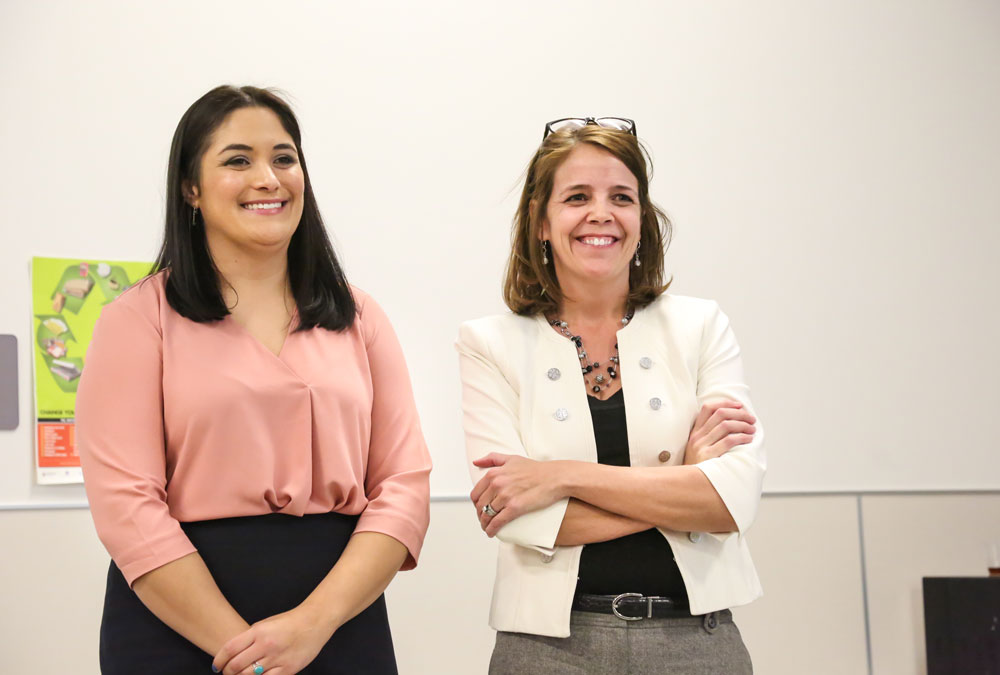 Stacy Parrish (left) and Amy Bringedahl (right), the two final candidates for Northfield High School principal, smile before a crowd of 75 attendees at Tuesday’s community meet and greet to announce the finalists.

Denver Public Schools announced two final candidates for the Northfield High School principal at a community forum on Tuesday, February 23. Seventy-five attendees gathered in the school cafeteria to get to know the finalists: Stacy Parrish and Amy Bringedahl.

The evening began with a few words from members of the School Principal Selection Advisory Committee (SPSAC). “We all hoped that Northfield would start as precise as a rocket launch and although it didn’t, the school will still succeed. These are two great finalists,” said a Stapleton resident, Northfield parent, and SPSAC member.

Stacy Parrish is finishing her principal residency at North High School and in her eleventh year of public education. She lives in Arvada with her wife and son.

Amy Bringedahl is currently the principal of Merrill Middle School. She has a 23-year-long career as a middle and high school social studies teacher, basketball, volleyball and track coach, assistant principal and principal. She lives with her husband in Littleton.

After one-minute introductions by the candidates, forum attendees had the chance to write down questions. Each candidate then went into a question-and-answer series.

Both candidates expressed the importance of diversity and inclusivity, and the potential of NHS to be a model of high quality education for all.

Stacy Parrish eloquently expressed her values and theories in education, seeming totally comfortable in front of the large crowd and even adding in a dash of humor. Her stage presence and passion for education made her likeable, according to parent reactions afterward. Parrish cited the awards she received for helping to close the achievement gap at a failing Kansas City high school.

Amy Bringedahl seemed less at ease talking to a crowd, but for every question she cited example after example of how she’s already achieved success in that area. Discipline? She uses restorative justice approaches and finds the right staff to help support students. Extracurricular? A coach of 18 years, she plans for Northfield to be one of the top athletic programs in DPS within three years. She firmly believes schools need to offer a variety of extracurricular and specialty electives to hook kids on education. Her deep commitment and pride about her success de-tracking at Merrill Middle School and establishing the school’s Newcomer Center for students new to the U.S were evident as she spoke.

So, which candidate is the right fit for Northfield High School? Both will interview with Superintendent Susana Cordova on Thursday, February 25 and a final selection will be made by early next week, according to Denver Public Schools. Return to FrontPorchStapleton.com later next week to read an interview with the new principal.