Chief White listens to Lynn Eagle Feather, whose mentally ill son, Paul Castaway, was killed by a police officer. In that case, the DA report concluded the officer acted appropriately and did not file charges against him. Police training to deal with mentally ill people was one of the suggestions made at the meeting.

On Jan. 24, community members packed a room at the Boys & Girls Club in North Park Hill to meet with Denver Police Chief Robert White at the first of three scheduled community meetings.

Answering the call for explanation and clarification, the meeting gave White an opportunity to present proposed policy changes and ask attendees for input.

“I believe, philosophically, that policing has changed over the last five to 10 years, but the police have not,” says White. Believing that now is the time for a change in culture at the Denver Police Dept. (DPD), White makes the distinction between traditional methods of law enforcement and the dynamic and innovative direction the new policy takes. Stressing the need for community engagement and feedback, White says the meetings arose from the realization that “voices needed to be heard face-to-face.” The policy draft serves as the foundation for discussion and citizen involvement. 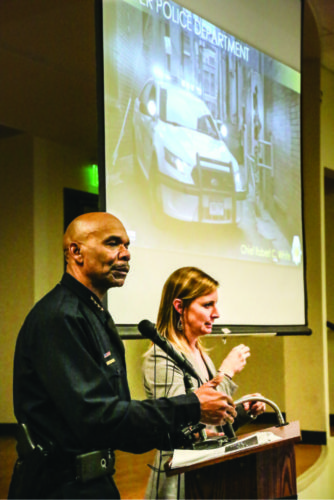 DPD Police Chief Robert White explains his draft of the Police Use of Force Policy.

Concerns voiced by attendees included the use of force by officers against citizens contending with mental health issues, homelessness and disabilities. Also cited were specific instances of the public perception of unfounded or aggressive force by police officers—specifically against people of color. White said, “While immediate danger justifies an officer using force,” he also emphasized, ‘My life was in danger,’ is not a get-out-of-jail-free justification. Officers must always be able to articulate that an action was objectively reasonable and necessary.”

DPD Deputy Chief of Administration Matthew Murray added, “We need to keep a balance in the communities we serve, and victims have to be at the heart of the conversation. We have to look at what we do to make sure it’s legal, but also that it makes sense and it’s the right thing to do.” Murray indicated that once a final policy is in place, the training will take about six months to complete. “Each officer needs to have a very clear understanding of what the expectations are.”

Precinct 511 Lt. Ian Culverhouse told the Front Porch, “This new policy draft is not a vast departure from what we have in place. It does emphasize more strongly the sanctity of life and de-escalation.” He says it’s important for officers to consider how the use of force will be judged and viewed afterwards. “De-escalation policies encourage officers not to rush into situations that are avoidable if possible. We already have language in our current policy that points out sanctity of life, but we want to continue to make that the number one goal so it does not get misunderstood in any way.”

Meeting attendee Dr. Alan Fine has worked as a psychiatrist in the mental health field for over 30 years. “There has to be a better working relationship between officers and mental health professionals to ensure that working techniques for de-escalation are adopted by law enforcement,” Fine said. “Often, the techniques officers use can aggravate a situation rather than effecting de-escalation, which is the intent.” Lorita Watson, representing Together Colorado at the meeting, requests a clarification.

After meeting in small groups, attendees presented suggestions. Overriding concerns include a need for clear definition of de-escalation training and officer accountability; a switch from a police-first to a community-first perspective; a lack of community involvement; and the need for cultural awareness and implicit bias training. Many felt that while the policy is on the right track, it needs a lot of definition and clarification.

Chief White promised citizens the department will work to improve DPD community perception by ensuring that officers engage with the community. This includes 35 percent of officer time be devoted to proactive patrolling enhancing crime prevention through community relationships. “The department will review all comments from the community meetings and those submitted by the public.” We will send an acknowledgement to individuals submitting suggestions via email so they know their input has been received. We promise to consider every suggestion as long as it is legal.”