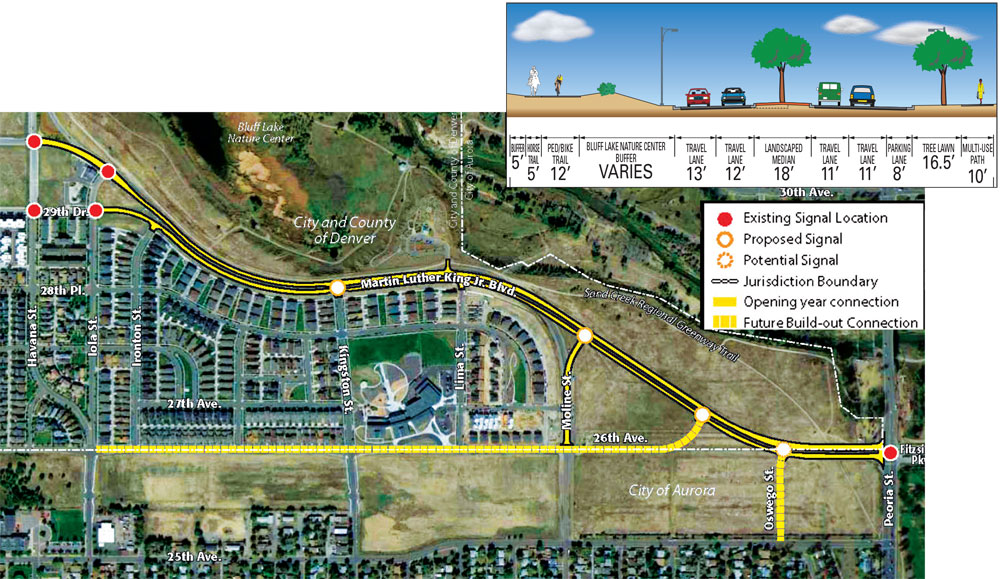 Map of the Martin Luther King Jr. Boulevard extension and other future roadways in the southeast portion of Stapleton. Courtesy of AECOM.

Construction of the Martin Luther King Boulevard extension from Havana Street to Peoria Street will begin in July or August said Dennis Arbogast, AECOM project engineer at the February meeting of the Stapleton Parks Advisory Group (PAG). Construction of the $15 million project is expected to take one year. The project is funded approximately half by Denver and half by a federal grant.

From Moline Street to Peoria Street, the project adds two through lanes in each direction along with 18 foot wide medians and detached parallel bicycle/pedestrian facilities: 10 feet in width on the south side, 12 feet in width on the north side to conform with Sand Creek Park Greenway standards. There will be on-street vehicular parking on the south side.
On the existing stretch of MLK from Iola Street to Moline Street, the project adds one lane in each direction.

The roadway will be posted with a 35 mile per hour speed limit.

Denver is hosting a public meeting on the MLK extension project at 6 pm on Thursday, March 3 at the Central Park Recreation Center.