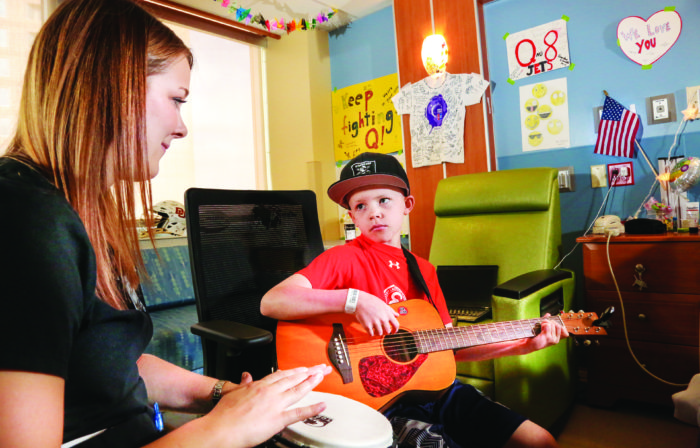 Music therapist Angela Wibben stops in to play a song with Quade, “Q”
Marks in his room at Rocky Mountain Children’s Hospital.

Four local people’s lives remind us that everyone can have an impact in the fight against cancer. Meet a nine-year-old with leukemia, a neighbor who accepted the call to be a bone marrow donor, and two survivors who dedicated themselves to raising money for research.

“I Have Cancer; Cancer Doesn’t Have Me.”

Last April, Michelle Marks noticed her nine-year-old son Quade, or “Q” as he likes to be called, had some unusual bruising, a rash and a swollen hand. Chalking it up to his active participation in a Stapleton youth lacrosse league, she made an appointment with their pediatrician just to be sure. After the results of his blood work came back, Quade’s doctor arranged for additional tests at the emergency room. He was diagnosed with acute myeloid leukemia (AML) and began immediate chemotherapy to prepare for a bone marrow transplant. The NE Denver community organized to raise funds for Be the Match and LLS.

While Quade, his parents and his medical team focused on treatment, the NE Denver community began concentrated efforts to help share his story and organize donation and fundraising events.

Meghan Montgomery, Quade’s teacher at the Swigert International School, developed a website with health updates, a photo gallery and links for those who wish to help through organizations like the Leukemia & Lymphoma Society (LLS), Bonfils Blood Center and Be the Match.

In June, a bone marrow donor drive was held, with the use of The Green donated by the Stapleton Master Community Association (MCA). Over 140 potential donors registered and $6,200 was raised to benefit LLS and Be the Match. Donations help patients nationwide who, like Quade, are fighting the battle to beat cancer.

Quade requires three rounds of chemotherapy before he can begin preparing for his bone marrow transplant. Currently undergoing round three, he has spent most of his summer as a patient in the hospital. The treatments have been successful and he is scheduled for a bone marrow transplant at Children’s Hospital Colorado this October. His transplant will use stem cells from donated umbilical cord blood. The match was found through the Be the Match registry.

Quade’s doctors say his positive attitude and the support of his family, friends and community are just as important as the medical treatment he’s receiving to beat cancer. The outpouring of support helps keep the spirits of the Marks family high. “We are so thankful to the Leukemia & Lymphoma Society and Be the Match,” says Michelle Marks. Kim Crine, at a blood donation event years ago, also agreed to be a bone marrow donor. She got the call and donated bone marrow—and another survivor is now well and healthy. She says she’d do it again “in a heartbeat.”

As a student in pharmacy school, Kim Crine, now a Stapleton resident, helped organize blood drives. She made it a practice to donate blood whenever she could. At one of the drives she was asked if she could be placed on the Be the Match registry as a potential bone marrow donor. She agreed without thinking twice. As time passed, life became full for Crine and she had almost forgotten about the registry. But after several years, she got a surprise call from Be the Match—and discovered she was a potential match.

Crine confirmed her willingness to donate and underwent additional testing to determine if she was the best match for a young man in his twenties suffering from aplastic anemia. When her results were in, she learned she was a match.

Crine met with doctors at Presbyterian St. Luke’s Medical Center who would perform her bone marrow extraction and she donated blood to be used in the event that she needed a transfusion during or after the procedure. Done on an outpatient basis, doctors took about a pint of bone marrow from her hipbone. She took the next day off to rest and then dove back into her busy life. Recovery brought only mild lower back pain and slight fatigue that lasted for about two weeks.

Crine’s bone marrow was transplanted immediately into the waiting patient. Happily, it is her understanding that the patient who received her bone marrow is healthy and doing well. “The benefit totally outweighed the risk,” she says. “I would do it again in a heartbeat.”

Steps Toward a Cure

Marc Paolicelli, vice president of corporate business development at RK Mechanical in Stapleton, was diagnosed with non-Hodgkins lymphoma in 2005. He received infusion treatments that have kept him in complete remission. On Paolicelli’s 45th birthday he made a commitment to make a difference to others fighting cancer. He contacted LLS to volunteer and served as chairman of the board and was named 2014 LLS Man of the Year, an award given to the highest male fundraiser in an annual LLS competition. Asked about volunteering and fundraising, Paolicelli says, “As an adult, I’ve had a great life. Actually seeing the advances in treatment that positively affect the quality of the lives of children makes it all very worthwhile. New treatment options are made possible by the funds raised through organizations like LLS.”

Jim Chrisman, senior vice president of development at Forest City Stapleton, Inc. and 2016 LLS Man of the Year was also diagnosed with blood cancer. He received treatment using stem cells from donated umbilical cord blood. During the fundraiser, Chrisman says an acquaintance who lost her husband to blood cancer five years ago told him her husband might still be alive today had this treatment been available to him—one of many reminders of the importance and the impact of LLS he heard during his fundraising campaign.

Chrisman made a carefully considered decision to volunteer and raise funds for LLS based on what he felt were the three components necessary for him to succeed at the highest level: a compelling story to share, a great network and a strong commitment to the cause. Chrisman raised $419,399, the most ever raised in the Rocky Mountain Chapter and the highest for men countrywide in the 2016 LLS Man of the Year competition. “Hopefully, with the funds raised now, people in four or five years will have effective new treatment options that are not available today,” says Chrisman, who has achieved remission and lives a healthy life. “I was really lucky because, with the help of my doctors, I was successful at every treatment milestone.”

The survival rates for blood cancers have increased dramatically and have been greatly impacted by the funding and research made possible through LLS. The total raised by the organization in 2016 was approximately $205 million with $55 million invested in research. Light the Night Walk for the Leukemia & Lymphoma Society
Sept. 29, 5:30pm
Denver’s Washington Park will glow with the light of over 10,000 lanterns to help fight leukemia and lymphoma.
Join the the Terumo BCT team walking for Quade or the RK Mechanical team at www.lightthenight.org