Owner Justin Baccary (left) and Head Brewmaster Wayne Waananen (right) pause for a photo during their first ever brew at Station Twenty Six Brewing Co., a brewery in north Park Hill that will open December 14. Housed in an old firehouse, Baccary says, “We have a cool space. People will be excited to drink here.”

Justin Baccary was all smiles on a recent Friday morning as he walked between humming equipment.  “We’re making beer!” he cheered, almost skipping. His energy was magnetic. Guys on ladders with paintbrushes cheered. Even Wayne Waananen, head brewmaster with just the right amount of crustiness, surrendered a smile.

After more than a year of preparing, Baccary is opening Station Twenty Six Brewing Co. in north Park Hill. “It’s a little surreal,” he says. They plan to open Dec. 14.

A New Jersey native, Baccary moved to Denver for a finance job in 2007 and started home brewing. Quickly he realized his passion was not finance, and he got a job brewing at Breweria in Aurora. After a couple of years, he decided to start his own brewery and connected with Wayne Waananen, who has won awards at the Great American Beer Festival and helped start the Sandlot Brewery at Coors Field.

While choosing the location, he hunted for an area in Denver that doesn’t have a brewery. “I mapped out all the breweries in town, and Park Hill and Stapleton was one big hole.” Baccary starts the brewing process by pouring kernels into the mill that grinds and transfers them to the mash tun, a large steel pot.

“It’s been a long process from finding the space to raising the money to ordering the equipment. And now we’re brewing,” he says with another smile. A few weeks before opening, the brewery is abuzz with preparation. After cleaning fermenter tanks, a worker ducks back into the main brewing area. The beer sits in the tanks for one to two weeks and is then transferred to serving tanks for people to enjoy.

Among nine other beers that will be on tap opening day, their first brew this particular day was Cherry Wood Smoked Amber Ale. Their goal is a variety of beers for every taste—easy-to-drink, hoppy, dark with coffee flavors, and more. “Just good beer. We don’t adhere to a strict box.”

They will brew twice a week and rotate beers on tap every week, often creating variations from already existing brews.

The brewery will not offer food, but people can bring their own, order delivery or buy from the food trucks that will park out front daily. While enjoying their beer, people will also be able to watch the brew process. Only a bar top separates the pub area from the brewing equipment.

“We think it’s cool we’re making beer only 15 feet away. We didn’t want to hide it. It’s sort of an integral part of the space,” he says.

In fact, the space is unique in many ways.

Firefighters vacated the firehouse in 2006. Starting in 2009, artists Ceri Jones Salahadyn and Khabir Salahadyn worked for a year to renovate the firehouse to operate their art and functional metalworks business called “The Collaboratory.” Their renovation included adding a code-required sprinkler system. They lived upstairs, where the firefighters slept, and used the downstairs as their workshop and retail area. Ceri and Khabir collaborated with Swigert principal Chuck Raisch and the school’s landscape architect to build a one-of-a-kind sunshade for the Swigert playground that illuminates the patterns of the constellations. The Salahadyns left the building when Khabir was diagnosed with liver cancer in 2012. Using a wood mash paddle, brewmaster Wayne Waananen stirs the grains, which sit in the mash tun for one hour at about 150 degrees.

Baccary was thrilled to find the space and says it’s well suited for a brewery. Big overhead doors made for firetrucks allow easy access for bringing in equipment. Thirteen-foot ceilings give plenty of space for big brewing tanks. The firehouse already has sloped floors and drains originally used to wash firetrucks, which otherwise would have been an expensive addition.

Upstairs, Baccary uses the firefighter dorms as office and storage space, where he predicts he will also sleep some nights.

Although built more than 40 years ago, the space has an edgy feel you may find in the Highlands, where Baccary lives. Stainless steel tanks combined with yellow tiles and red brick are not the typical bar atmosphere. During the summer they will open the overhead doors.

“We have a cool space. People will be excited to drink here.” 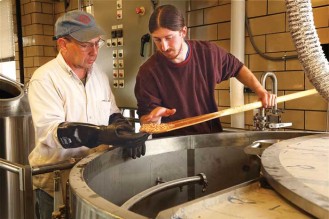 The two occasionally check grains. After an hour, the liquid is pumped into the boil kettle where hops are added, and leftover or “spent grain” is given to farmers.