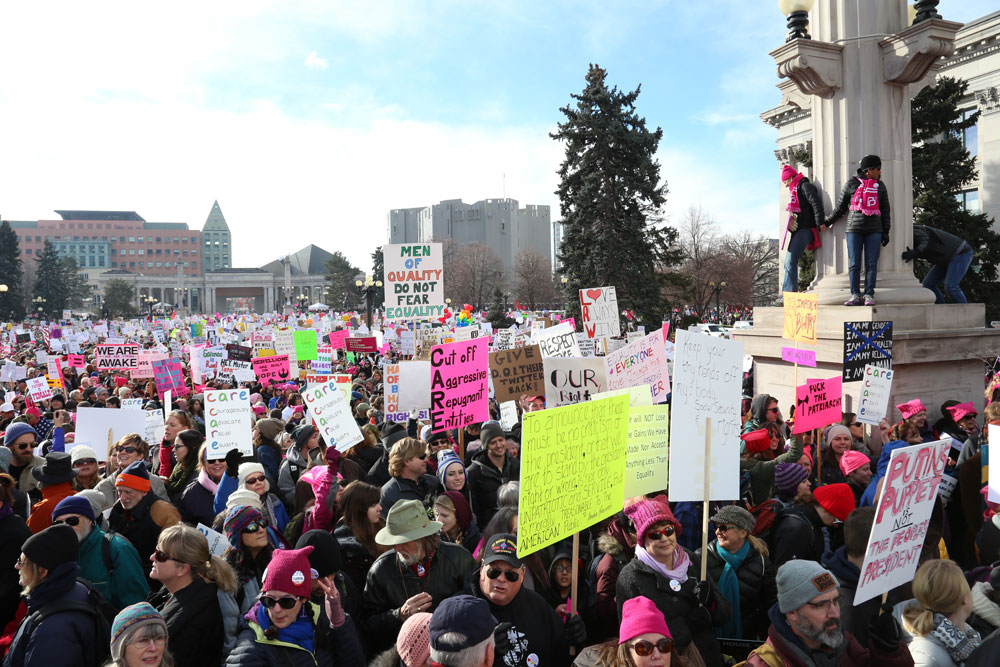 As the march time drew nearer, the crowd, shown here with the library and art museum in the background, became ever tighter, waiting shoulder to shoulder to march down 15th St. Despite a delay getting started, everyone remained upbeat and polite, meeting their new, very close neighbors and enjoying the range and creativity of the signs that rose above their heads.

Denver, with an estimated population of 682, 500, saw at least 15 percent of that number packed into Civic Center Park for the Women’s March. (Some estimates put the number as high as 200,000.) Participants were there to protest the policies of the new administration and to reassert their commitment to universal civil rights, reproductive freedom and nonviolent action, among other causes displayed on the multitude of signs. The Denver marchers were joined by others around the country, including over 500,000 in Washington, D.C. and an estimated total of three million worldwide. A single sign sums up many of the recurring themes of the day. Diane Deeter’s message, taken from Dr. Seuss’s book, The Lorax, was a serious concern presented in a light way. Other signs, like the one below, reflected humorous but direct statements of disagreement with the new administration.

Women, men and children of all ages carried handmade signs that expressed a range of attitudes and concerns. Many signs were funny, some dead serious, some angry. The signs expressed support for a gamut of causes —women’s rights, healthcare, reproductive freedom, racial justice, science, kindness. The acronym “C.A.R.E.” was common, but participants customized it to their own concerns, i.e., “Concerned About Racial Equality,” or “Can’t Accept Republican Egomaniacs.” Creative expressions included papier mache uteruses, Trump puppets, Princess Leia costumes, and, especially, the ubiquitous hot pink knitted “pussy hats,” a sly turnaround to a rude remark our new President once made.

Participants remarked on the politeness of the crowds, and came away feeling inspired, uplifted, and energized. But now the question arises, where will this energy go? A sign uses the slogan from the television show, The Apprentice.

In the wake of the march—and indeed, even before it took place—the rise to power of the Trump administration has created a new sense of urgency among many progressive groups.

Capitalizing on this energy and taking a cue from successful Tea Party activities, direct action groups have been formed through social media, both within Women’s March pages and separately, including Indivisible and C.A.P.E. (Community Activism for Progress and Equity). These groups are focused on contacting representatives at the national and state levels to express concerns about administration appointments and to promote a progressive agenda. Will the movement sustain itself and make the change it claims to want through these endeavors? Time will tell.