47 tables with city staff filled the Bill Roberts gym for the Cabinet in the City on Nov. 1. The mayor’s entire cabinet
was available for conversations with attendees. Second graders from Westerly Creek School sang to open the event. In addition to city staff, RTD, DPS, and community organizations participated in the event.

Safety was a big topic in the remarks before the crowd mingled with city and other officials in attendance. Mayor Hancock described doing a secret drive through with an officer when he was a councilman. They were looking for crimes of opportunity after a rash of burglaries in Stapleton. “The number of crimes of opportunity we found in Stapleton…people who would park cars and leave windows down with ipads, ipods, iphones laying on consoles. Garage doors up and nobody home. Front doors open with people in the back yard. It was amazing. 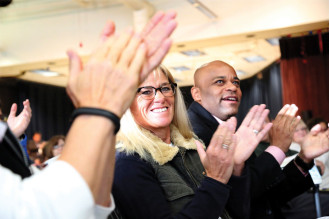 “The reality is, when it comes to crimes against property, 90% of the prevention rests with us…to be more aware, to eliminate the false sense of security, to think about it…if you’re in the back yard, shut the front door, lock the door, shut the windows. Do the things around the house. All it takes is just a few seconds for someone to walk in your garage and steal hundreds or a thousand of dollars worth of tools. We just want to encourage. What the commanders were saying is we own a lot of this to prevent crime against ourselves.”