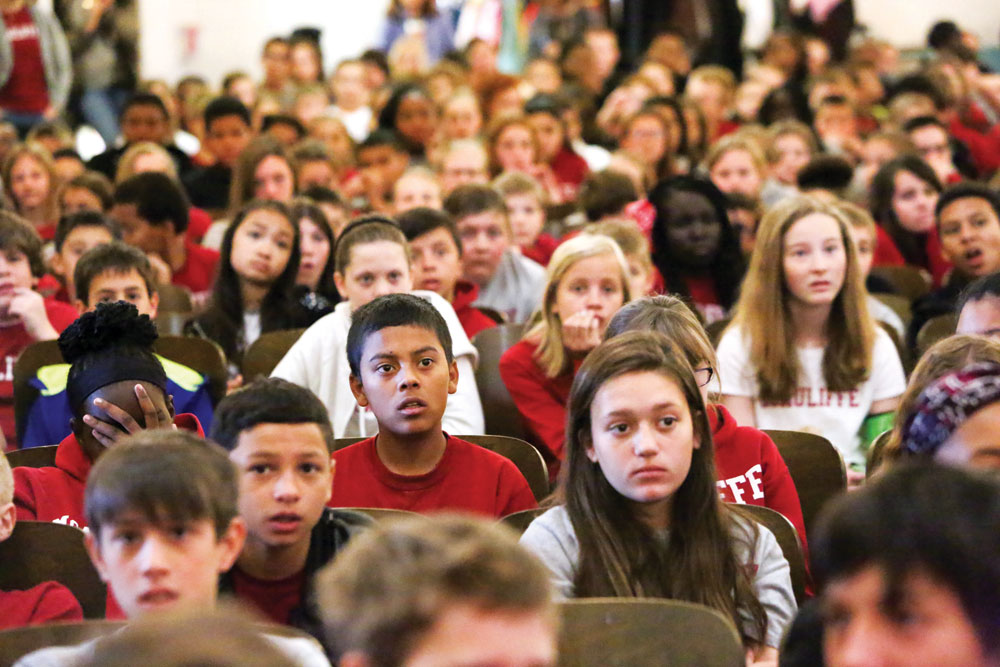 The runaway success of McAuliffe International School’s move to the Smiley campus has created new opportunities but also new controversies, both of which were on display at a May 11 meeting between school officials and Park Hill and Stapleton families to discuss growth options for the shared middle school boundary.

The expected departure of the Venture Prep charter school, which currently shares the Smiley campus with McAuliffe, will soon open nearly 400 seats of additional capacity—and those seats will be sorely needed, as Stapleton’s middle-school-age population continues to grow and Park Hill sees skyrocketing rates of families choicing into the shared boundary.

The question, and the most heavily discussed issue at the May 11 meeting, is what exactly to do with the extra space at Smiley. One option would allow McAuliffe, the wildly popular International Baccalaureate (I.B.) program whose enrollment soared above 800 students for the upcoming school year, to expand further, up to 1,200 seats. A second option would be to co-locate a second, 600-seat middle school on the Smiley campus, reducing the size of McAuliffe to 600 seats.

Parents at the meeting were generally unenthusiastic about the possibility of a shared campus, with several pointing out the logistical challenges of sharing common spaces like the cafeteria, auditorium and athletic fields. Others worried about the potential that one program could be vastly more successful than the other. There was also concern that shrinking the size of McAuliffe by some 200 seats would require cuts to teaching staff and programming.

“A smaller school can’t offer the same suite of options,” said Stapleton resident Kathy Epperson. “McAuliffe has dynamic programming like language instruction in French, Spanish and Mandarin, six different engineering courses, and seven arts electives in part because it has [the student body to support this programming].” If the district shrinks the school, there will be less money for that programming, she added. Upheaval among the staff could also result, as some teachers and administrators may lose their jobs to downsizing.

Parents asked McAuliffe principal Kurt Dennis what an increase in size to 1,200 seats would mean for the school and its students. Dennis emphasized that it would be important to plan any such expansion with adequate advance notice, so that the school has “time to grow thoughtfully and intentionally.” Assuming that is the case, Dennis said he believes a larger McAuliffe “can create the supports and structures our students need for success.”

In an e-mail following up on his comments, Dennis explained that allowing the school to expand would, counterintuitively, create a smaller feel for students. Each incoming sixth-grade class would be assigned an assistant principal and mental health team that would travel with that class for all three years, he said. Also, each grade would occupy a different area of the school, making it feel to students more like they are at a 400-seat school.

Expanding McAuliffe would increase capacity in the area’s top choice program in the shared boundary. It would also allow the school to offer more after-school enrichments and elective options, Dennis said, including multiple teams and club sports to ensure that students have the opportunity to participate in sports at all ability levels. In addition, Dennis vowed to lobby the district to allow additional competitive sports teams at an expanded McAuliffe so athletes would not be disadvantaged by attending a larger middle school.

An expansion could also help address the hot-button issue that created some tense moments at the May 11 meeting: the fact that 122 rising sixth-graders who listed McAuliffe as their first choice were unable to get in for the 2015-16 school year.

Several Park Hill residents argued that DPS should create a proximity preference that would allow their children to attend McAuliffe ahead of Stapleton residents. They pointed out that Denver’s 2020 strategic plan calls for every student to have access to a quality neighborhood school, and argued that the shared boundary had diluted this goal, tearing some kids away from their elementary school classmates and community. In response, several Stapleton residents pointed out that it was the creation of the shared boundary, and McAuliffe’s move from Stapleton to the Smiley campus, that had made Park Hill’s neighborhood school suddenly so desirable. Just a couple of years ago, when the only neighborhood option was the failing Smiley Middle School, the vast majority of Park Hill residents sent their kids elsewhere; barely 20 percent chose to attend Smiley. Now, nearly 80 percent are choosing to remain within the shared boundary.

At least one parent lamented the tone of the entire argument. “I find it troubling that we’re talking about this side of Quebec and that side of Quebec,” said Scott Esserman, Park Hill resident and parent of students at Montclair Elementary and Denver Discovery School. “We have five outstanding middle schools to choose from. It’s an embarrassment of riches. Other families in DPS have no quality options.”

Current district planning calls for the sixth-grade class at McAuliffe to increase from 282 seats in 2015 to between 325 and 350 in 2016, to accommodate growth in the number of students from both Park Hill (due to the increased choice-in rates) and Stapleton (due to demographics and new development).

Brian Eschbacher, director of policy, planning and analysis for DPS, said he does not anticipate additional growth from Park Hill beyond 2016. Indeed, he said, the potential of a new I.B. middle school in the Whittier neighborhood, modeled after McAuliffe, may pull some families from west Park Hill, decreasing capacity pressures on the shared boundary. However, Stapleton’s share of boundary growth will continue into 2017 and 2018, thanks to the incoming demographic “bubble” of current second- and third-graders. Additional students are also anticipated from explosive residential growth north of I-70, where more than 3,000 new homes will start construction by 2019.

While the district’s public discussions of medium-term planning tend to be vague at best, there were some questions that suggested what the future of the boundary may look like.
When a parent asked about the possibility of expanding Isabella Bird Community School to be K–8, school leader Sonny Zinn said unequivocally, “We’d like to expand.” The school’s cafeteria, auditorium, athletic fields and underlying infrastructure were designed to support a possible future middle school, though new construction would be needed to add the necessary classroom space.

In a similar vein, several parents lamented the placement of a second campus of the Denver School of Science and Technology in Conservatory Green, a decision that has been criticized as lacking community input. In response, Alyssa Whitehead-Bust, chief academic and innovation officer at DPS, noted that “the school is on a three-year lease,” and said its current location is “a temporary one,” furthering speculation that the school may move outside the Stapleton/Park Hill boundary, and a different program may move into its current location.