Above and left: Den Leader David Weaver and the girls of Den 7 Peyton Dick, Helina, Carys O’Hara and Lila Remster lead the “Little Bird” song for the rest of Pack 34.

While the BSA is opening these programs to girls, interested communties still need to establish new Cub Scout dens and Scouts BSA troops if they wish to sign up girls. Those new troops would be single-gender but provide identical programming.

Northeast Denver’s Pack 34 entered the program as an early adopter and chartered an all-girl den amongst its established all-boy dens early this year.

“By its nature, it was always a family program,” said Stephanie O’Hara, the mother of one of the first girl Cub Scouts who also has a son in the Boy Scouts and an older daughter planning to join Scouts BSA when that opens up. 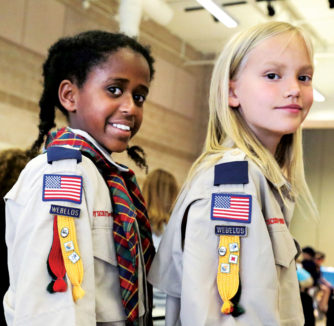 O’Hara said for girls like hers, they were always around scouting and they appreciate the well-defined programming and focus on survival skills. “We really like the camping aspect. It’s actually written down. You can’t earn rank unless you camp,” said O’ Hara.

But girls couldn’t earn rank at all until this BSA policy change, which legitimizes the achievements girls might have been making previously on an ad hoc basis.

Many of the other parents in Pack 34 say they value the ability to earn rank for their girls, especially when girls will be able to work towards Eagle Scout—the highest rank obtainable for current Boy Scouts.

Wayne Hall said other programs don’t have quite the same emphasis on earning ranks and badges. He saw a lot of added value for his daughter Addie in the Stapleton Cub Scout organization. While Addie participated in Girl Scouts and the Pippin Guiding program in New Zealand, a focus on things like safely using a match or pocket knife were appealing.

She had just won her heat in the Cub Scout Raingutter Regatta in July. There, Cub Scouts raced sailboats they built by blowing through straws. “We did lung exercises,” Addie joked when asked about her strategy. She also mentioned that an insect, “Captain Bug,” helped lead her vessel to victory. The Girl Scouts initially criticized the BSA for the move to include girls in its ranks, citing the benefits of girls and boys learning separately within certain age groups. While several events like the Raingutter Regatta, especially during the summer, involve both girls and boys, the Cub Scout dens themselves are either all-boy or all-girl and organized under regional packs, which may be mixed or single-gender.

The same will be true for Scouts BSA in 2019. Scouting “troops,” as they are known, will be separate and can either operate with their own charter and committee or have linked leadership.

Stephanie O’Hara’s husband, Sean, is the scoutmaster for Boy Scout Troop 34. As a leader for the older Boy Scouts, he saw the future inclusion of girls in Scouts BSA as a real boon, especially in Stapleton. As a new neighborhood, Sean said Stapleton lacked the deep roots in scouting other areas might have. The area doesn’t, “have a church of every denomination and there are not a lot of service clubs.” Churches and clubs often charter dens or troops and provide critical facilities. Sean hopes the more inclusive family scouting will help build momentum in the area.

When it comes to scouting, Robert Baden-Powell wrote the book. As a British general serving during the Second Boer War, he returned to Britain and established the Boy Scouts Association-—writing down its values in Scouting for Boys in 1908.

Baden-Powell prefaced the book: “The aim of scouting is to replace Self with Service, to make the lads individually efficient, morally and physically, with the object of using that efficiency for the service of the community.” Boy Scouts pose in front of the US flag at the Sopris School in Sopris, Colorado. Taken in 1915, five years after the formation of the Boy Scouts. Today Trinidad Lake stands where Sopris once was.

Coming out of an era of rapid industrialization and urbanization around the turn of the century, these values along with a focus on the wilderness resonated with families and young boys in Britain and later the United States, among other nations.

Only two years after the establishment of the original scouts under Baden-Powell, the Boy Scouts of America was founded and garnered considerble support from the likes of Theodore Roosevelt. “The prime lesson that the boy scout movement is teaching is the lesson that manliness in its most vigorous form can be and ought to be accompanied by unselfish consideration for the rights and interests of others.”

His support, along with enthusism from various spiritual and service organizations, including a 105-year-old partnership with the Mormon church, helped the Boy Scouts build momentum—reaching membership numbers in the millions.

In recent years, membership has been in decline. The Mormon church, whose boys make up a fifth of BSA membership, announced their departure from the program.

This year, BSA began accepting girl Cub Scouts and in the past few years reversed its controversial restrictions on gay and transgendered scouts and volunteers.