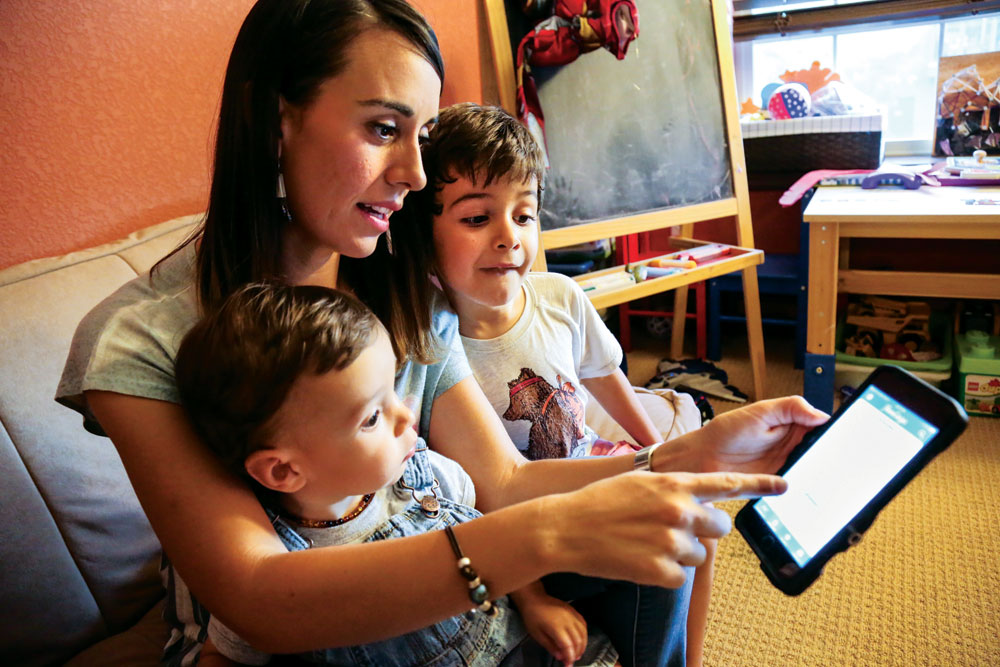 Sophia Cruz Davila uses the MamaLingua app with sons, Pablo, 4, and Daniel, 15 months. An example of the screen is shown at right.

In the course of a parent’s day, they find themselves repeating things over and over: “Get dressed,” “Brush your teeth,” “What would you like to eat?” etc. With a smartphone app, MamaLingua, those repetitious phrases become learning opportunities, teaching children as young as newborns to become bilingual. “They have discovered that in kids from birth to 2 or 3 years, their brains can identify by the accent if it’s Spanish or English or French or German, for instance,” says Stapleton resident Sofia Cruz Davila of MamaLingua. “If you teach a baby two languages, their brain changes and makes it easier to learn any other languages later on. That’s why our goal is to try to introduce a second language in the earliest year.”

Cruz Davila says there were a lot of smartphone apps geared toward preschoolers and elementary school kids. But there was a need to provide an app for the first years of life and language learning. Although babies and toddlers are the focus, Cruz Davila says the app is still effective and helpful even in older children.

The MamaLingua app is currently only available for iPhones and iPads. It has a free, introductory version and a full version costing $7.99. The app is organized alphabetically and by day-to-day categories such as reading, sleeping, eating, changing and playing. Users can also create lists of words or phrases they may need to focus on.

Cruz Davila became involved with MamaLingua after meeting Aileen Passariello-McAleer, co-founder of the app when they were both living in Stapleton, raising bilingual children. Passariello-McAleer, who now lives in Texas, asked Cruz Davila to be the person focusing on teaching English to Spanish-speakers while Passariello-McAleer focuses on Spanish to English-speakers. The opportunity allowed Cruz Davila to do something for herself while still being able to be a full-time parent to her two young children. “With Aileen living in Austin, we are still able to work together,” says Cruz Davila. “It’s the advantage of new technology that we can connect and most of the work we do is online.”

The target audience for MamaLingua is families all over the world interested in both teaching their children and themselves a second language. “The app is meant to be interactive,” says Cruz Davila. “It’s for parents to talk to their kids—it’s not just to play the app for the kids so that they’ll learn.”

While the app can be a stand-alone tool, encouraging community is also part of the effort. The app is being introduced to area foreign language schools, such as La Academia Marie Sandoval, as a suggested way parents can continue bilingual education outside the classroom. In addition, a line of Spanish children’s books is expected to be available for sale on the www.mama-lingua.com website early next year for both native Spanish-speakers and those learning the language.

The primary means of growing community, though, is through MamaLingua’s Facebook and Instagram pages (each with English and Spanish versions), providing vocabulary, phrases and daily tips. Parents from multiple countries connect, ask questions and communicate about teaching their children a second language. Cruz Davila also participates in a separate Stapleton Facebook group not affiliated with MamaLingua, Stapleton Spanish Babies and Toddlers, which, although a “closed” group, welcomes new members who can request to join online. The group is an opportunity for bilingual families to meet face-to-face, practicing language skills with each other and their children.

“Learning a second language is easier if you start in the early years,” says Cruz Davila, “but it’s never too late.”