Construction begins on the downstream segment or “reach” between 12th Avenue and New Freedom Park. Work will proceed south through a middle and upstream reach extending to 11th Avenue.

Another “reach” of Westerly Creek is being rehabilitated as the long-term plan for a greenway from Lowry to Sand Creek continues its slow march. Contractor mobilization began the week after Thanksgiving for a $2.01 million channel improvement project for the stretch of Westerly Creek that runs from 11th Ave. near Willow St. to the New Freedom Park located between 12th and 13th avenues near Xenia St.

The proposed restoration includes re-establishing a healthy riparian channel with wetlands, native uplands and a functioning floodplain. Project elements include realigning the existing trail for safe access, realigning the alley in the middle section to create “buffer uplands,” and installation of new trees, shrubs, ground cover, benches and a low-water crossing near New Freedom Park. The creek itself will be realigned to create more curves, or sinuosity, to both increase flood capacity and reduce stream bank erosion. Denver Parks & Recreation is managing the project. 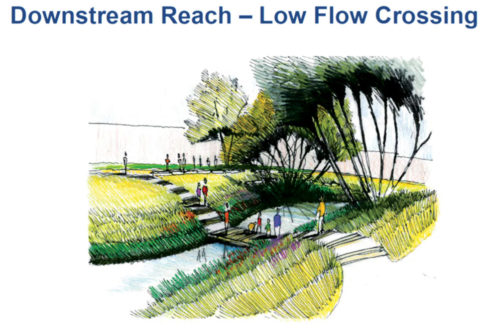 One million dollars for the project comes from the Natural Resources Damages Fund administered by the State of Colorado. That fund was created from a natural resource damages settlement associated with the Rocky Mountain Arsenal and is intended for Northeast Green Corridor projects such as those along Westerly Creek. The creek is considered a “biological steppingstone” through the urbanized core before it reaches the South Platte River corridor. Other funders are Denver ($435,000) and the Urban Drainage and Flood Control District (UDFCD) ($575,000). To reestablish a healthy stream channel, slopes will be reduced, pocket wetlands created, and new native vegetation planted. Trails will be realigned to create safe access to an evolving, multi-use greenway.

In the city’s application for the NRDF grant, a support letter from UDFCD described efforts in the 1980s to increase the size of Westerly Creek’s underground conveyance to prevent the worst of flooding from occurring. The district went on to say, “However, the drainage and flood control management of the reach in the project area of Westerly Creek was mishandled from the beginning.” The new project “will allow more enhancements for wetland areas, wider riparian buffers, and a more sustainable native upland habitat. These enhancements will create a more sustainable environment for some of the most disadvantaged citizens in the city, while helping to recharge the groundwater and manage storm water conveyance.” Project completion is slated for June 2017.

This project is the latest in a series of stream restoration efforts, the most recent of which are Westerly Creek North in Stapleton and Montview Park in Aurora. The City of Aurora recently applied for Great Outdoors Colorado funds to construct a multi-use path adjacent to Westerly Creek where it passes through city-owned property located between Colfax and 16th avenues. The city project also includes a community garden that is a joint venture between Denver Urban Gardens and the Asian Pacific Development Center. The Aurora City Council awarded $50,000 to help fund this project. The garden is in early stages of design based on community input.