The world-class Denver Zoo now has a world-class, state-of-the-art animal hospital to treat the animals that live within its walls. And the visiting public now has a front row seat to watch as veterinarians conduct examinations, treatments, and surgeries. The 22,000-square-foot Helen and Arthur Johnson Animal Hospital contains intensive care units monitored by video cameras, a research lab, two high-tech treatment rooms, a premier surgical suite, and indoor and outdoor rooms for animals that need to be hospitalized. It also has an oversized ambulance to safely carry animals to the hospital. 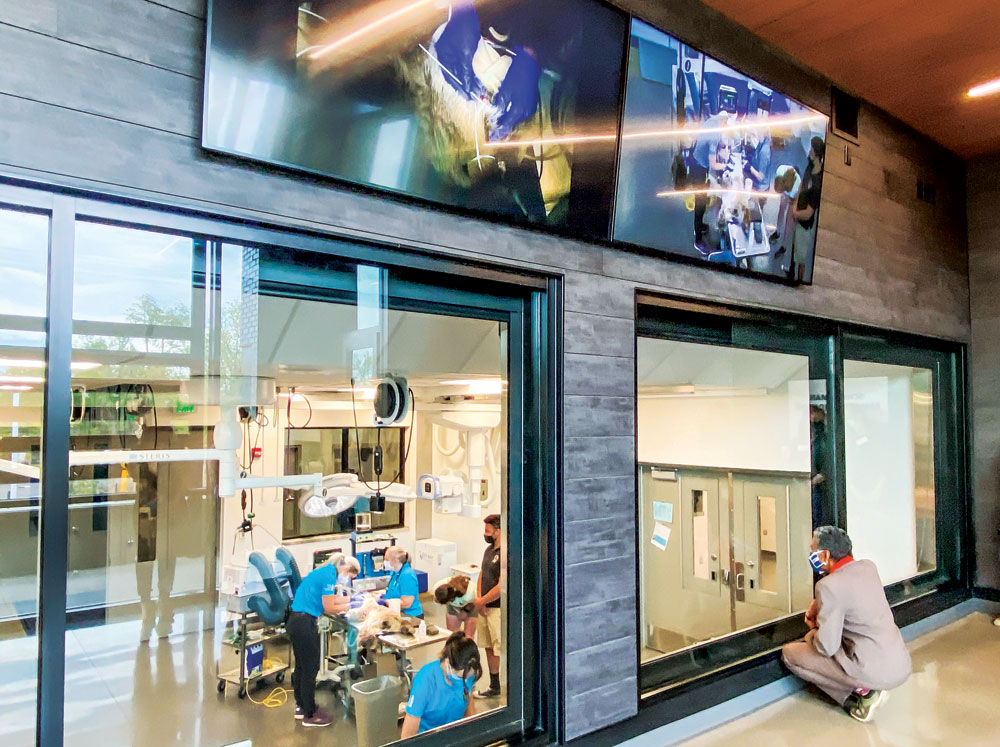 Gov. Jared Polis, who attended the ribbon cutting ceremony, said the building ushers in a new era for animal care. “This is a working monument to the wellbeing of the more than 3,000 animals that call the Denver zoo home and also the seat of research that will benefit animals all over the world.”

The hospital’s visitor center has large windows that look down into the treatment and surgical rooms. A veterinary technician greets visitors to explain what procedures are being performed and answer any questions. Zoo officials estimate that treatments and procedures will occur approximately 25% of the time when visitors are present. Since surgeries are much rarer, they are likely to happen only once or twice a month. Large overhead screens will feature videos of animals being treated when the hospital rooms are empty. While the facility is able to serve the vast majority of the zoo’s residents, the largest animals—such as elephants, rhinos, and giraffes—will continue to receive treatments in their own habitat enclosures. Veterinarian Betsy Stringer examines Charlotte, a 25-year-old two-toed sloth—drawing blood, testing reflexes, listening to her heart and lungs—to make sure she is healthy before being moved to a new habitat area.

In addition to private donations, most of the funding for the $22 million hospital came from a 2017 voter-approved bond called Elevate Denver. Mayor Michael Hancock said the facility was one of the crown jewels of the 2017 bond. “Hopefully young people will be able to walk through here and be inspired to become a veterinarian. Inspired to become a zoologist… That’s the power of what we’ve created here.”

The visitor center opens to the public June 1, but veterinarians have been using the hospital since September. Scott Larsen, vice president for animal health, said the new facility brings the Denver Zoo’s veterinary care into the 21st century. “It’s already making a tremendous difference in the lives of our animals.” The zoo’s new CT scanner has already helped diagnose medical conditions in animals as small as a bird and as large as a 400-pound tiger.

Larsen pointed to the new CT scanning machine as an example. Previously, zoo veterinarians took animals to National Jewish Hospital for CT scans about 6-8 times a year (on Sundays when the hospital was closed to human patients). Now that the zoo has its own CT machine, animals are scanned 6-8 times a month. Larsen says the scanner has helped them diagnose conditions that weren’t picked up with ultrasounds or x-rays. “It’s been transformative in the kind of diagnostics that we can do.”

Although the hospital will only be used to treat animals living at the zoo, Gov. Polis noted that the research conducted at the facility’s new lab will have far-reaching impacts. “Research that is developed here helps inform biologists and protect endangered species across the globe,” said Polis. Larsen added that the new facility will allow biologists to do behavioral research and study infectious diseases that could impact animals both at the zoo and in the wild. “It will allow us to better understand animals and what they need to survive in the wild.”

Zoo President and CEO, Bert Vescolani, said the animal hospital is “the first step in a new direction for the Denver Zoo.” He said many other additions are in the works, including a new habitat area for penguins that will open later this summer.