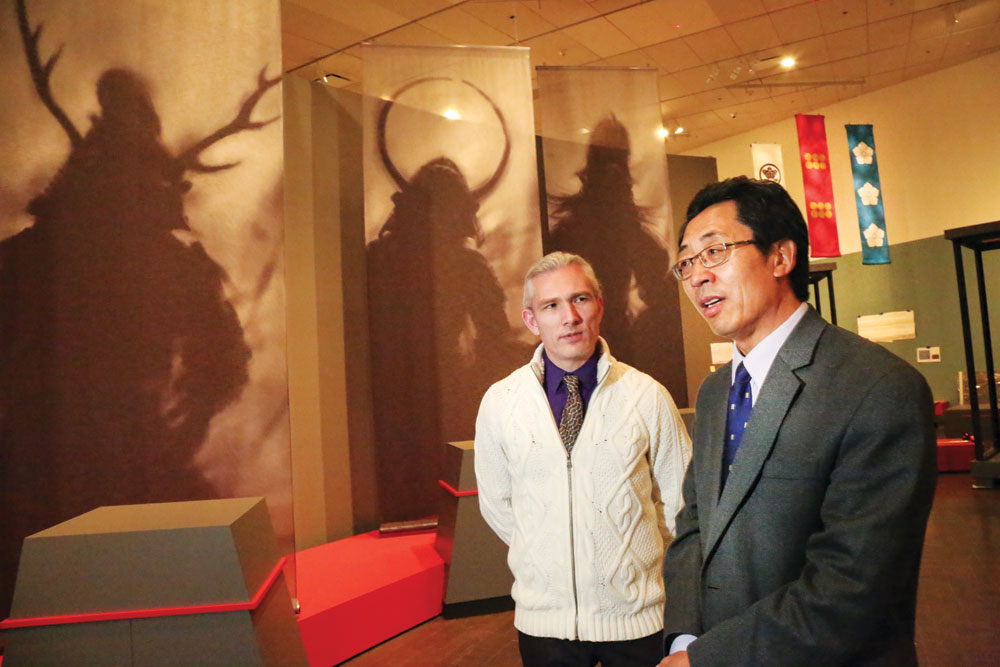 Tianlong Jiao, right, curator of Asian Art, and Douglas Wagner, left, curatorial assistant, share their vision for the exhibition. “The Samurai have become the stuff of myth, but we show them as people, the way they saw themselves,” says Wagner.

“The Samurai are known as fierce warriors, but what many people don’t know is they were also the cultivated class,” says Tianlong Jiao, curator of Samurai at the Denver Art Museum, opening March 6. “They were highly educated and they were instrumental in developing the Japanese arts. They were also the administrators of Japanese society from the 1100s until the 1800s.” 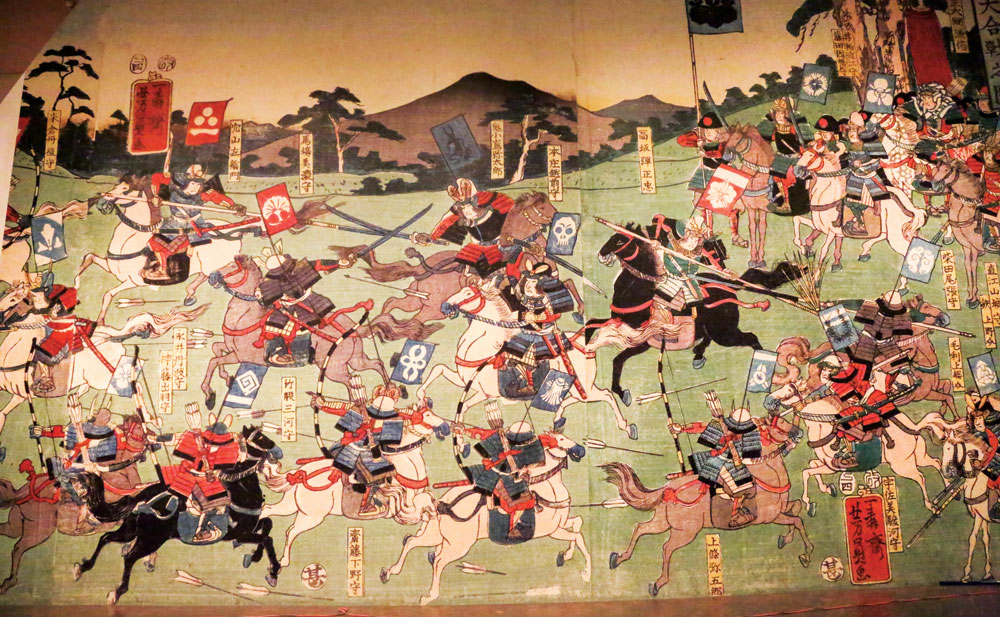 Samurai: Armor from the Ann and Gabriel Barbier-Mueller Collection tells the story of the Samurai through 140 pieces including armor, helmets, weapons and horse trappings. “We give visitors direct contact with the real people who wore the armor,” said Douglas Wagner, curatorial assistant of the DAM’s Asian Art Dept. “People think of them like gunmen of the West but they were not. This exhibition shows the Samurai as they saw themselves, including direct quotes about their philosophy, which was steeped in Buddhism. They were a unique warrior class that controlled the Japanese government in peace as well as war. They wrote literature and poetry and they held art and religion in high regard.” The Samurai exhibition begins with a 26-by-50-foot mural depicting a battle scene, accompanied by three full-scale Samurai on horseback. “The mural is enlarged from a Japanese print from the 19th Century and  shows an actual battle in 1561 between two great generals,” said Wagner. “The daimyos, or feudal lords, led clans that battled each other to establish authority over large regions or the whole country.

“Japanese history is full of great warriors. Originally the Samurai were the military arm for the court, but later they established themselves as a de facto power. They came to the pinnacle of the Japanese hierarchy and worked in concert with the official government for seven centuries.”

Women of the Samurai class were trained in weaponry and fire-fighting in order to defend their homes while the men were away. “Some women trained in battle arts and fought alongside the men,” said Wagner. Armor with mask by the famous Myochin family of craftsmen. An elaborate suit of armor from the 18th Century greets visitors.

The exhibition continues with an armorers’ workshop, including  video of a craftsman making a sword. “The armor reflected high art and the finest craftsmanship, involving many craftsmen with specialized skills,” said Jiao, DAM’s curator of Asian Art. “A full set of armor might involve expertly trained blacksmiths, goldsmiths, lacquer makers and textile makers. Some armor was for war and some for peacetime. Artisans passed their skills from father to son through the generations. The Myochin is one such well-known family of metalworkers represented in the exhibition.” Inspirations for the decorations on Samurai armor include religion, folklore and nature. A helmet with a flame design represents hōju no tama, the flaming jewel, a Buddhist symbol signifying the bestowal of blessings on all who suffer. “Tengu, a half-bird, half-man forest-dwelling spirit who taught martial arts to generals, is depicted in armor from 1854,” said Wagner. “The fearsome demon Oni is evoked in a helmet from the 16th to 18th Century. Another helmet from the 16th Century is nature-inspired, with a bamboo (eboshi) shape and deer antlers.”

Children are invited to make the bamboo-and-deer-horns helmet as one of the activities in the Just for Fun Japan Center. They can try it on along with kid-sized Samurai armor and masks. Other activities include rock balancing, Japanese garden blocks, a “guess who” game with the Asian art collection, and Buddha board water painting.

Samurai runs from March 6 to June 5 at the Denver Art Museum, 100 W. 14th Ave. Pkwy. Tickets range from $5 for children to $20 for adult non-members. Ticket purchase allows access to the rest of the museum. For more information and tickets, see denverartmuseum.org.