Mark Shaker (left) and Lorin Ting show renderings and photos of their ideas for turning the huge Stanley Aviation building into a marketplace. The plan is to keep or re-use as much of the original building as possible. The peaked roof structure at right on the west side of the building is a large scale. It will remain on the property as an architectural feature and its shape may be replicated elsewhere.

What happens when you combine business acumen with a passion for creating community—in a space that accommodates both in a very big way? Mark Shaker, Lorin Ting and Megan Von Wald are planning a marketplace with more than 130,000 square feet of combined leasable and community space in the old Stanley Aviation building in NW Aurora. And that’s not including the great outdoors. The building comes on a 22-acre lot—including two bridges over Westerly Creek and six acres of land west of the creek. 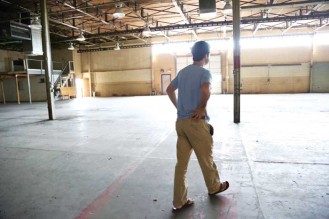 Mark Shaker walks in one of the large spaces that will likely be a restaurant. The garage door visible at rear opens to a view of Westerly Creek.

Larger commercial establishments will fill the spaces around the perimeter of the huge building. An event center run by the team’s partnership, Flightline, is planned in an area that was formerly a hangar. The space has eight windowed sliding doors, 25 feet high and 12 feet wide, that open to a patio and a view of Westerly Creek.

Shaker, who is a social worker by training, has worked in non-profits for the past 15 years. One of his goals, also shared by his partners, is to create something that “gives back to the community.” He has read the Green Book (the Stapleton Development Plan) and shares the vision for Stapleton, one piece of which is a seamless connection to surrounding neighborhoods. The Stanley property is in Aurora and borders Stapleton along 25th Ave.

“This property is walkable and bikeable,” says Shaker. “We’re at the nexus of trails going north-south and east-west, and we like the idea of being a bridge between neighborhoods and doing something interesting that integrates folks. We like what’s happening in Aurora. We like what’s happening in Fitzsimons.” Shaker says they are excited about the opportunity to bring those two communities and Stapleton together.

“We want to create an environment where people come time and time again,” says Shaker. He envisions it as a destination people want to go to, then they figure out what to do once they get there. “It’s an unbelievable site and it has incredible potential,” says Ting. “You can just get lost in the scale. You don’t realize how enormous it is…We want to build something that’s cool that people can hang out at.”

The Stanley Marketplace team has met with both the NW Aurora and Stapleton communities as they have refined their plans. Taking into consideration the demographics of both neighborhoods, they say there will be a variety of restaurant options that will be a good fit for both communities—with some restaurant and retail options that have price points that differ from what’s in Stapleton.

The number of entrepreneurs and home businesses in the NE Denver/Aurora communities inspired the Stanley team to plan multiple spaces for small businesses to show and sell their products. These spaces, some potentially as small as 300 square feet, will circle the core of the central marketplace space. Shaker and Ting explain that the original use for the windowed mezzanine level of the central core (shown in the background on page 1) was for supervisors to oversee the workers at Stanley Aviation. Stanley Marketplace may utilize up to 2,000 square feet of that area for a community room.

In November 2013 the Front Porch ran an article about Flightline’s proposal for a beer garden/restaurant in Eastbridge—and in December we ran a follow-up article saying Forest City would not sell the space until they had finalized a deal with a grocer. Shaker says the Aurora staff saw the articles and contacted them, offering to show available properties in Aurora.

Aurora’s retail specialist, Tim Gonerka, says, “We are excited about the interest in Northwest Aurora and the opportunity triangle of Stapleton, Lowry and Fitzsimons. A viable and exciting project on this site has been an important part of Aurora’s vision for this area of the City, and with good reason. Connections between the Stapleton, northwest Aurora and the Arts District are growing and making all of the neighborhoods stronger and more interesting for residents, both present and future. We believe The Stanley will be a catalytic project to help move the area to become a truly great place to live, shop, and experience.” Ting sits on one of the two bridges on the property that crosses Westerly Creek.

“Aurora bought into the project from the beginning and we’ve been working in tandem. We have an open dialogue about what we’re trying to do. We give them all the credit in the world. They took a chance on us,” says Shaker.

Shaker has been working full time on this project for the past year. Ting, an electrical engineer, quit his job as a project manager in May and is now working full time on the Stanley Marketplace. After originally planning to close the sale in late July, they are now planning to close in August and they say they will release more specific information about their tenants at that time. They hope to open Stanley Marketplace in 12-15 months.

Stanley Aviation was founded by Robert Stanley, who invented military aircraft ejection seats and built a manufacturing plant to produce them in Aurora, next to Stapleton airport. Stanley has a long list of other accomplishments in the aerospace industry. Among them, he was a test pilot and engineer and, in 1942, was the first American to fly a jet aircraft. According to one story about him, he would take his private aircraft out of the hangar at the Stanley building late at night and taxi onto the Stapleton runways to go for a night flight— and would be met by local authorities upon his return for unauthorized use of the runways (which apparently didn’t stop him from doing it again).

Robert Stanley died in a plane crash in 1977 when severe wind shear took down his plane. After Stanley’s death, Stanley Aviation was acquired by another company—and subsequent to that by Eaton Corporation in 2005. Eaton closed the Aurora plant in 2009 and a collection of Stanley ejection seats was donated to Wings Over the Rockies Air and Space Museum in Lowry at that time. The building has been empty since then.

7 comments on “Stanley Marketplace: Its Scope and Scale are Mindboggling”