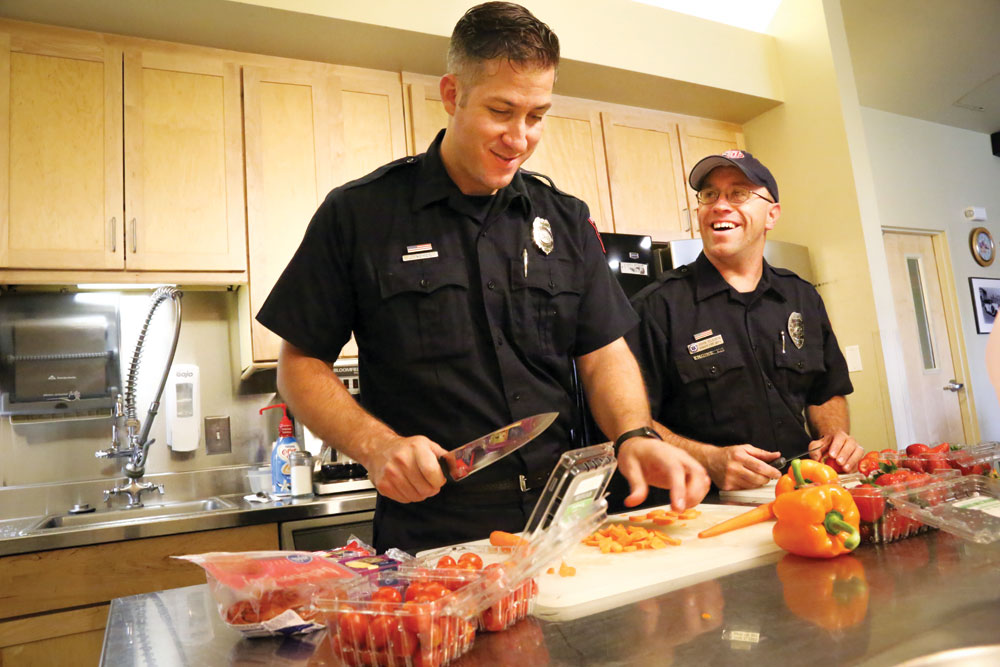 A historic photo hanging in the firehouse shows chow time in 1921, which looks remarkably similar to today’s chow time. The crew of eight from Station 26 sit down to enjoy their meal.

When the heat is on, the crew of eight firefighters from Station 26 has to work cohesively, drawing on their individual strengths to bring about as positive an end result as possible. That’s true for when they are dealing with a fire, an auto accident, or a big batch of pork green chile.

The men and women of Station 26 on MLK Blvd. are a familiar sight around Stapleton. Not only are they seen at emergencies but they are seen daily in the grocery store, buying the ingredients for that day’s lunch and dinner for the crews that work a 24-hour shift, starting at 7:30am.

Four firefighters are assigned to each of the station’s two rigs: the engine, which has the primary function of getting water to the fire, and the truck, which has the ladder, for victim search and rescue and ventilation. Melissa Taylor, public information officer for the Denver Fire Department, says Stapleton is fortunate to have both rigs. Some firehouses have one or the other.

The two teams of firefighters alternate who has kitchen duty. Because they can be called to an emergency at any time, the firefighters have to go to the store together, with their rig, so they can leave at a moment’s notice to make their 4-minute response time goal. If they have items in their cart, a store staffer will put it in the cooler so they can continue shopping when they get back.

If they get called out while cooking or eating (or showering, using the bathroom, exercising or sleeping), they also have to drop everything and go. If the other crew isn’t needed on the call, that group may take over meal preparation. But if they both go out, pots have been forgotten on the stove and more than one pot has had to be thrown away over the years.

Every morning, each of the eight firefighters puts $10 on the counter to pay for the day’s meals. Referred to as the “League,” that’s a budget of $5 per person, per meal for the day. Sometimes, as a perk, a higher-ranking firefighter might throw in some extra money so that the crew has something special like steak. Some people, mistakenly thinking the firefighters’ meals are funded by the city, have asked in the store what their tax dollars are buying for dinner that night.

Mindful of their tight budget, the firefighters shop the sales and sometimes change their meal plan once they get to the store. One person generally decides the menu that day and he or she runs the show in the kitchen. At some stations, one or two people do most of the cooking, but at Station 26 they all take turns. The large kitchen has two refrigerators, a six-burner stove and large center island—and the crew that has kitchen duty chops, cooks and serves.

In true firehouse tradition, the cooks give each other grief about what’s being prepared. Firefighter Tonya Kesterson says, “If you chop it one way, they’ll say you should have chopped it that way. It’s all brotherly and sisterly jiving.” That extends to what’s on the menu too. “We give them grief, no matter how good it is,” says firefighter John Clasen. “Sometimes we’ll say ‘Oh, that dish again’ or ‘What’s the number for Dominos?’” Complaining can backfire. For instance, it is not advisable to say “I hate onions.” Instead, say, “I prefer not to have onions” or else there will likely be French onion soup and other onion-centric dishes for days.

On the day the Front Porch visited, Clasen was the lead cook, making a lunch of pasta salad with pepperoni, cucumbers, tomatoes, peppers and cheese, served with potato chips and strawberries with yogurt. The firefighters knew they were going to be training all morning and deliberately picked an easy meal to prepare. Accommodations are made for firefighters with special dietary needs. Lt. John Padilla, who does a lot of the cooking at Station 26, says they’ll try to leave certain things off or serve them on the side. The cooking crew drives their truck to the grocery store and shops together in their uniforms. “A typical recipe isn’t feeding eight people and eight firefighters at that, so that’s something we have to alter in our menus,” explains Padilla. Clasen reverently points to a slightly stained, well-used firefighters cookbook. “These are recipes from people who have been here and gone,” he says. “But they stumbled across something that was good and put it in the book. Every firehouse should have that cookbook.”

Taylor explains that many firehouses, including Station 26, have the tradition of making a big batch of scratch-made green chile on Saturday night for burritos or rellenos with the intention of having extra for the next day’s shift to enjoy in huevos rancheros for Sunday brunch. Sunday dinner is always pasta, usually lasagna, manicotti or spaghetti with meat sauce—but never, ever from a jar.

The firefighters at Station 26 have fun bantering about their favorite dishes: Norton signals an employee to take their grocery cart and the crew runs to meet their goal of being in the truck within four minutes of receiving the call.

Padilla: That’s the one! That was outstanding. Which one of my dishes do you like best?

Trujillo: Joe’s Ribs or your rellenos.

Padilla: How about the “footballs,” the calzones?

Trujillo and others pipe in: Oh man, those are good. How about buffalo chicken sandwiches? Those were good. What was that pizza with shrimp and sauerkraut?

Padilla: That was an experiment. That won’t make the books.

Sometimes no one wants to take the lead cooking. That’s when they bring out their Shut-The-Box dice game. The loser has to cook.

When the meal is ready to serve, five rings of the firehouse bell signal “mealtime.” That day’s head cook eats first, sitting at the table that accommodates all eight firefighters. They pass dishes back and forth, talking and laughing. Table manners aren’t an issue. “There are enough people to police those who get out of line,” says Padilla. “So I don’t think there has been a food fight in a long time. It’s fun but nobody wants to clean it up.”

Want to try a firehouse recipe? Check out the three below for Minestrone, “S.O.S,” and Burgundy Beef.